Pennsylvania’s first Director of Outdoor Recreation, Nathan Reigner, believes the Keystone State is the hidden gem of the outdoor industry.

Reigner pointed out the state’s Rail Trails, endless miles of gravel roads for biking, white and flat water to paddle, deep woods to get lost in and historic sites to explore.

The Montgomery County native began in the position this year. Reigner holds a Ph.D. and is a social scientist who taught in Penn State’s Recreation, Park and Tourism Management Department. He also worked as a consultant in the private sector.

Around 20 states in the country have an Office of Outdoor Recreation or an Outdoor Recreation Task Force. In Pennsylvania, outdoor recreation generates $11.8 billion for the economy, according to a report from the Outdoor Industry Association. The industry also creates 146,127 Direct Jobs, the report states.

"The establishment of my role is an acknowledgment that outdoor recreation has been providing these fruits for us," Reigner said. "It's my role to maximize our harvest of these benefits, through coordination and connection in the outdoor recreation sector by trying to identify trends and help us move into the future with our recreation, infrastructure and management, and by helping helping the recreation sector itself realize its power and engage that power for the benefit of the Commonwealth.”

The Outdoor Industry Association serves as the trade association for the outdoor industry. It has been around for 30 years. Rebecca Gillis, State & Local Government Affairs Manager for the association, said there are a lot of stakeholders involved in what she calls the “outdoor economy."

There’s private sector organizations, mom and pop and big box retailers, she said. There’s nonprofit partners, government at every level and of course those who spend time in the outdoors.

"The purpose of an outdoor recreation director or you know, in the case of Nathan … is that he is able to sort of take all of those inputs, and get them on the same page to ensure that everybody's efforts are collaborative and adding toward the general well being of the outdoor economy," Gillis said. "And therefore also for in our view, climate and sustainability, and on behalf of recreationists.”

Gillis said before states established offices of outdoor recreation or hired directors, many groups with similar values were working towards the same goals.

"But not necessarily coordinating as well as they could," she said.

"For not only collaborative behavior but an increase on the return on investments when it comes to the outdoors and outdoor industry," Gillis said.

Reigner echoed Gillis. Outdoor Recreation in Pennsylvania involves all of those stakeholders as well as regional coordination between the entities, he said.

The establishment of his role acknowledges that the industry is a big and integrated sector and that somebody within the state government can help bring all of the interests together, he said.

Directors or Offices of Outdoor Recreation are a fairly new trend, said Gillis. Utah was the first to establish the role in around 2015, followed by Colorado, she said.

The Outdoor Industry Association is collecting data about the impact of the role, Gillis said, pointing out that because of the increase in people using outdoor spaces during the pandemic the need for a person or office to collaborate with all the stakeholders of the outdoor economy is so badly needed.

"I will say in those states that had offices or directors, you saw kind of a better or … more cohesive management or response to the uptake of outdoor recreation across the United States," Gillis said.

Pennsylvania was no stranger to a sudden burst in outdoor recreation because of the pandemic. But Reigner believes it was growth on top of an already-expanding industry in the state.

He sees trends happening not just statewide but industry-wide that the Keystone State should take advantage of including new and different types of outdoor recreation, including electric bikes and other technology driven trends. He said the days of calling a park office or ranger for information are over and the state should take advantage of social media and smartphone apps.

Currently Reigner is traveling the state and developing relationships with partners including for-profits and nonprofits and municipal leaders. Eventually the state could establish an office of Outdoor Recreation to help communities, he said.

Under Pavilion 3 at Beltzville State Park in Lehighton on a bright, sunny mid-May day, Reigner stressed not just the economic benefits of outdoor recreation but the social, physical and mental health benefits of the industry. He recalled a study from the 1960s.

Scientists surveyed fishermen in the Great Lakes Region after a day out on the water. Regardless of whether or not they hooked a fish, they reported having a great day. For the fishermen it wasn’t about the catch. They saw the sunrise and an eagle fly overhead. They spent time in a boat with a friend and the heavy things weighing on them felt lighter by the end of the day, he said.

“What this story tells me is that there's more to fishing than catching fish. And that tells me that there's more to outdoor recreation than simply the activities that we engage in, there's more to hiking, then taking a walk," he said. "I come to this position of Director of Outdoor Recreation with a perspective that outdoor recreation, the way we should be trying to promote it in our state and grow it is with a focus on the things that it does for us as people, as individuals, the things that it does for us as communities." 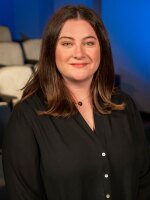