Behind the doors of a Lewisburg church, rows of singers watch their conductor closely.

The conductor’s hands wave through the air as he leads them, piece by piece, through lines and notes of music the world outside of their rehearsal space has never heard before.

Dr. William Payn stands front and center, raised above the level of the pews with a music stand before him. He is here with the choir every Tuesday night, and for the past few weeks, has been teaching the singers of the Susquehanna Valley Chorale a new, hour-long piece - his own.

“The first time I heard them sing one of the movements… it was everything I had hoped it would be,” he says. “Everything that I was hearing in my head as I composed… I had chills.”

When the COVID-19 pandemic sent groups of all kinds, especially singing groups, into lockdown in 2020, the Susquehanna Valley Chorale delayed their 50th Anniversary Celebration. Their board of directors gave Payn a six-month sabbatical to allow him to compose an original work for the choir.

The “multi-movement,” work the choir is rehearsing now came from that sabbatical, Payn says. It’s called Love, and it’s composed of more than a dozen pieces of love-themed poetry set to music. The Susquehanna Valley Chorale will debut the piece and finally celebrate their 50th Anniversary next month.

“It just draws us together,” she said

Reese sings the alto one part - there are times when the music splits into as many as 12 voice parts amongst the sopranos, altos, tenors and basses.

“I know there are going to be parts where his eyes twinkle at the alto ones,” she said. “Because he’ll think, I wrote this for you. I know what your voices can do, and you’re going to love this.”

A consortium of other choral groups sponsored the composition of Love, and once the Susquehanna Chorale debuts it, those sponsors will be able to learn and perform it as well.

“I have eight university choirs or community ensembles and one church choir that have signed on to this consortium,” Payn said. “This piece is going to come alive in New Jersey, in Minneapolis, in Virginia - so I’m thrilled about that.” 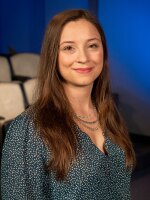