New projects include a downtown connectivity plan, protections for walkers and cyclists, and trails that highlight a historic site.

Scranton officials want to make it easier for walkers and bikers in the Electric City.

“We are planning to make Scranton a safer environment for pedestrians and cyclists,” said Scranton Mayor Paige Cognetti. “We really want Scranton to continue to be a place where people are gathering downtown.”

Several ideas about how to make that happen have been brewing in the city through local nonprofit organizations and commissioned study groups.

Cognetti said the almost 30-mile Heritage Trail is a great asset that runs through the city and Lackawanna County.

“We’re continuing to work on how we can connect the trail better into the different amenities we have in the city,” she said.

Plans have been in place for a few years, but were derailed due to the pandemic, said Cognetti.

Jeff Speck, a walkability expert and writer, spoke at Lackawanna College last month. The seminar kicked off Scranton’s downtown connectivity study, which is being funded by American Rescue Plan dollars.

Speck, author of “Walkable City: How Downtown Can Save America, One Step at a Time,” is working on the project with partners at San Francisco-based Nelson Nygaard Consulting Associates, Inc.

Speck has helped out roughly 15 cities with a downtown plan before coming to Scranton, including Bethlehem and Lancaster.

Speck made it clear that the goal to improve downtown Scranton for pedestrians and cyclists isn’t meant to ostracize motorists. It might even improve the experience for drivers.

Trimming down the size of driving lanes downtown and installing all-way stop signs at intersections are two simple ways that Speck likes to make improvements.

He said in some cases, replacing traffic signals with stop signs reduces the number of accidents.

Speck pointed to Philadelphia as an example. The city removed 462 traffic signals in 1978, replacing them with all-way stop signs. As a result there were 24% less car crashes and 68% less severe pedestrian injuries.

“And incidentally, drivers get through the downtown faster, because they’re never waiting at a light,” Speck said.

Speck worked on a plan in Oklahoma City that was implemented several years ago.

“We were able to cut the number of driving lanes by a third without increasing traffic congestion,” he said. “We doubled the amount of on street parking. We introduced a bike network where they had none.”

Local nonprofit Valley In Motion (VIM) will be involved in the process to improve Scranton’s bike and pedestrian infrastructure. Gus Fahey, the organization’s president, said VIM recently received a few grants to put the Iron Furnaces at the center of a trail expansion. He said the industrial landmark is in a central location and could help to connect the Lackawanna River Heritage Trail to Nay Aug Park.

“It’s at this important access between South Scranton and the downtown, along the Roaring Brook,” Fahey said.

He said he wants to see the historic site, which is operated by Pennsylvania’s Historical and Museum Commission, become a more accessible place. The Iron Furnaces played a part during the industrial revolution, producing crude iron or pig iron.

“That’s crucial for the development of Scranton,” he said. “It’s really what made Scranton turn from a sleepy hollow to a major industrial city.”

Fahey credited architect Michele Dempsey for her vision to connect the city’s neighborhoods to the historic site. He also said organizations like the Lackawanna Heritage Valley Authority and United Neighborhood Centers have been involved in brainstorming his organization’s trail idea.

Cognetti noted that all of the plans, including a 2020 study headed by the Lackawanna Luzerne Metropolitan Planning Organization and recent designs by Scranton Tomorrow, will be incorporated into the larger project.

“We’ve got to make sure we’re doing our part to make it safer for people to walk and bike around the downtown and to and from our neighborhoods,” she said. 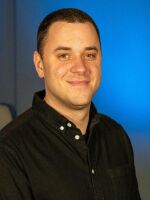 Tom Riese | WVIA News
Tom Riese is a multimedia reporter and the local host for NPR's Morning Edition. He comes to NEPA by way of Philadelphia. He is a York County native who studied journalism at Temple University.
See stories by Tom Riese | WVIA News
News Briefs
Related Content